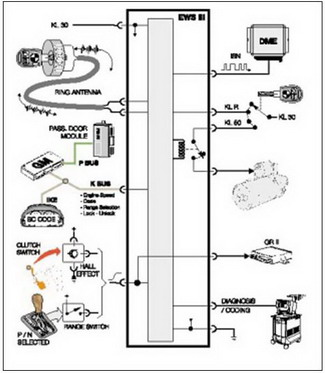 Input From the K-Bus:
Reduction in wiring has also been accomplished with the use of the K-Bus for data communication between the GM, Door Module, IKE and the EWS III (3.2) control module. This data link provides the following signals to be communicated on one wire:
• Engine Speed.
• Lock and Unlock Requests.
• Code Function.
• Range Selector Position (Redundant Signal).

Engine Speed:
The DME outputs the engine speed (TD) signal over the CAN Bus to the IKE. The IKE uses the TD information as needed and passes it on to the EWS III (3.2) via the K-Bus.

Code Function:
The code function status arrives at the EWS control module over the K-Bus. This information allows/disallows vehicle operation based on code status. If a code has been set and entered correctly during the start-up, the vehicle will operate normally based on the other inputs. Entering the code incorrectly will prevent vehicle operation.

Range Selector Position:
Range selector position is still provided directly to the EWS III (3.2) control module from the Transmission Range Selector Switch. Redundant information is provided over the K-Bus in case of loss of signal from the range switch.

A Hall-Effect Switch is added to the clutch system to inform the EWS III (3.2) control module of clutch status. Input from the switch replaces the signal from the Trans Range Selector Switch on manual transmission equipped vehicles. High signal status indicates the clutch is depressed and vehicle starting is allowed.

• As the starter begins to operate, the EWS III module sends the ISN to the DME and if verified as correct by the DME, drive away protection is cancelled and injection and ignition is enabled. The EWS III module also sends a new changing code to the key transponder through the ring antenna.

DME Control Module
DME Control Modules are (off the shelf) parts requiring programming during installation.
The ISN of the DME is not changeable and must be transferred to the EWS III (3.2) module.

Key Activation
Keys that are lost or stolen may be deactivated or made to not operate the starter functions.
The SERVICE FUNCTIONS of AutoHex Diagnostic scanner for EWS III (3.2) contains a (Bar/Release Code) function that activates and deactivates keys of the EWS III (3.2). Any key may be (Barred) except the key in the ignition at the time of deactivation.
The lost or stolen key can be identified by the identification of the remaining keys.

There is no limit to the number of times a key can be activated/deactivated.